There are so many choices out there, as many choices as there are people on this earth as far as what is considered soul food.
To me it's a meal that makes me feel warm inside, comforted, loved, appreciated. Not necessarily something I've cooked myself since it usually feels a lot better if it's from someone else. And it's usually something that I've eaten before since eating it again brings back memories.

For my husband, one of the meals I make that he considers soul food is a beef stew that simmers in the oven for a couple of hours with the smells permeating the apartment and I'm sure several other apartments above and next to us.

1/2 kilo of lean beef cut thin. I pick mine up at the Vietnamese market since I know the meat is lean since it's from the front leg.
3 large carrots, peeled and sliced into 1/2 in. chunks
2 large stalks of celery, chopped into 1/2 in. chunks
2 large onions, peeled and cut into 1 in. chunks
1 head of garlic, peeled & roughly crushed with the flat side of my knife
3 tbsp extra light olive oil
5 large potatoes, peeled and cut into 1 in. chunks
3/4 liter of beef broth, low sodium brand
1 large tomato, seeded & cut into chunks (optional)
100 ml of tomato sauce or ketchup if all else fails
generous pinches of fresh ground pepper, kosher salt
generous pinches of dried oregano, thyme
1 tbsp of sweet paprika sprinkled over the potatoes
1 cup of brown flour * 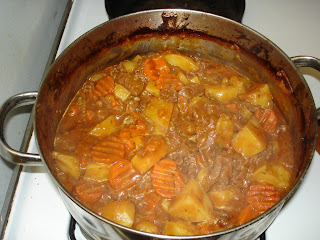 In a large pot that can go from stovetop to oven over high heat; put the onion, garlic and celery. Stir and cook for a few minutes or until the oil disappears. In small amounts so the vegetables can caramelize, add some beef stock to keep everything from burning. Bring the heat down to med/high and continue to stir until the onions begin to be transparent. Add pepper, salt & herbs.

Add 1/3 cup of beefstock and start putting in your meat that's been dredged in the brown flour to the pot. Stir occasionally to keep things cooking evenly. Once the meat is done, should only take a couple of minutes. Add the carrots, the rest of the beefstock, tomato sauce and potatoes which have been dredged in leftover brown flour. If your pot doesn't seal well, put a sheet of aluminum foil over the pot and cover with the lid. This should create a tighter fit.

Put in a 375*F oven for 90 minutes. At the one hour mark, take stew out of the oven, stir it up to make sure that the vegetables all get equal time in the sauce. Put it back in for another 30 minutes. At the end of the 90 minutes, if the sauce is too thin, take the foil off and put the stew pot back in the oven with no lid for 15 minutes. This will thicken the sauce.

This makes enough stew for 2 hungry people over a 2 day period. It tastes even better reheated! Bon appetit

Put the flour in the cast iron frying pan, spread it out evenly and put it on the bottom rack of your oven with the broiler on. Keep an eye on it since the flour will begin to brown. Take it out every few minutes and stir up the flour so the browned parts mix in, level it off again and return to broiler. Keep doing this until the flour gets a rich tan/brown color after it's been mixed. Don't walk away from making brown flour or you will end up with black flour which is not very tasty.
The resulting brown flour can be used for thickening sauces and dredging meats instead of using the commercial preparations which are loaded with salt.
Posted by MarieAnge at 8:07 AM