The week flew by!

Last week I spent temping for the local newspaper's real estate publishing division doing data entry. It's actually a glorified copy n paste and confirming/deleting information from a database through searched on the internet. A bit tedious, but it's work and more importantly it brings money in! So yes, I'm happy.
Initially my placement agent quoted the job at 1 to 3 weeks in length. The next morning, I walk in at the new placement and within a few minutes am informed that the placement will be 4 to 6 weeks... Bonus!
So on my 25 minute commute I crochet more of the Africaan flower motifs, this time to make a carpet for the bathroom floor for when we get out of the shower. I'll have to back it with a couple of those non skid mesh rectangles that are used for lining cupboards, and stopping carpets from flipping over. I love that rubberized mesh that comes in all sorts of colors and takes abuse quite well. A few weeks ago, I made a cover for the toilet in the same colors (navy blue & aqua) I'm using for the carpet. Now that the landlord has covered up the glaringly loud royal blue paint, the seat cover and carpet will look very nice. I won't be making the carpet that usually goes in front of the toilet. The bathroom is tiny and the carpet would overwhelm an already tiny space. 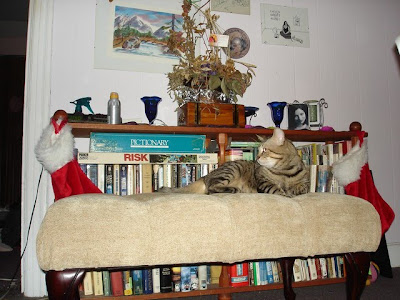 I'm also looking at our large footstool that Gambit has been using as a scratching post and bed ever since we got it. He's managed to destroy one side of it with claw sharpening. We tried everything, duct tape, foil paper, shooing him away, but all in vain. He will defiantly walk up to it, flop over and attack it with claws, dragging himself on the floor along the full length of the stool. He looks like a horizontal mountain climber. He'll also wait to do his nefarious deeds when we're not in the same room. 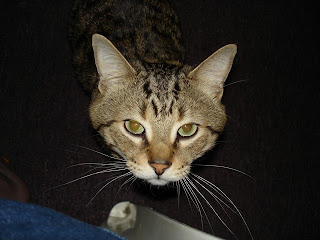 I'm likely going to make a cover with the same motifs but in different accent colors with a dark background. At least it will hide the damage his majesty made to the footstool. I'm not posting a photo of what it looks like now, it's embarrassing. Let's just say that in the 2 years we've owned this poof, it looks like it's gone through a rather nasty war involving sharp objects.
For those who have not been following my blog, introducing..... the Master of all Evil Kitties, Heeeere's Gambit! Yes, yes, I know... he's so cute! but he's also soooo evil!
Posted by MarieAnge at 2:59 PM

congrats on the extended hours... Mr P thinks they are about to cut his hours back... aparently they have let all the contractors on the shop floor go... oh dear... me thinks this thing called "recession" is just beginning! :(

never mind something will always turn up... roll with the punches and go with the flow...! ;D