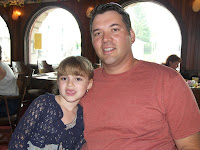 Sometimes, life hands you things that you really don't want to deal with. Once again, our family has been hit. My baby brother is in ICU in critical condition after a freak accident while helping a friend.

To make a long story short, since I tend to be long winded at times, he fell into a deep trench and hit his head on a large stone. He has fractured just about every bone in his skull and face including his jaw. He also suffers from a severe concussion and has to be kept sedated, despite the fact that he is in a coma, to minimize movement. 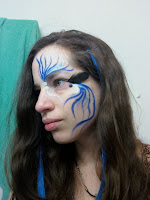 putting pressure on his brain. There will be more surgeries once the swelling goes down to wire his jaw, reconstruct his cheek bone and repair the two breaks in his skull, one large break across his forehead and another smaller break at the back of his skull caused by the impact.

One cheering point to the past couple of days was this photo my daughter sent of herself. She attended a bartending competition at her workplace and a professional makeup artist offered to paint her face. Such a pretty girl is my daughter.
Posted by MarieAnge at 3:04 AM

Oh Angel! I'm so sorry about your brother!!! What a freakish accident, and such serious injuries following it. I'll keep him in my thoughts and prayers and send caring your way. I'll ship a big truck full of hugs to you, so watch for it. :) Hope brother does well, and is fully recovered soon. love,
samm