Update on the Caribbean Topper 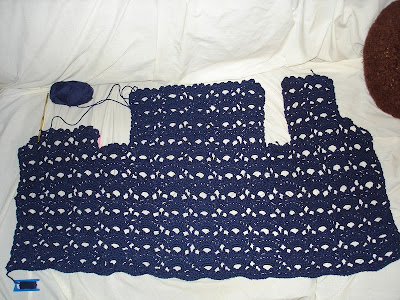 I have 3 repeats to go on the one front and then comes the seaming of the shoulders and the final go rounds of the arm holes and the entire outside of it. I'm not going to attach buttons to the top since I want my daughter to have options as to where the buttons go and how many buttons she wants to use. So... in order to give her that option, I'm using a pattern found in one of Doris Chan's books on how to make joined buttons that can be used anywhere along the front.
I'll add photos of the buttons when I finish them. Right now I'm concentrating on finishing the vest first.
Other stuff in the works but I can't post about those until later :)
Posted by MarieAnge at 4:51 AM