My sister & her shawl 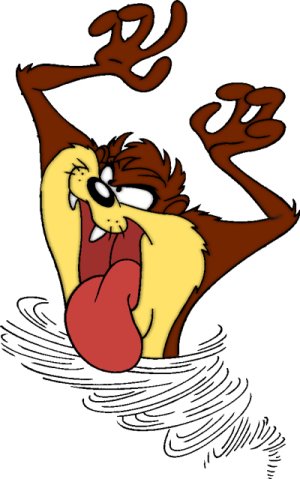 Cancer is a lot like a tornado when you think about it. Just as a tornado will skip over a house, a school, a church and wipe out the building next to it without a second thought, so does cancer. Why does it take one person but skips over the next. Is there anything that predisposes the person it takes? Research shows that it may be genetic, environmental, dietary or just plain old bad luck. Any way you look at it, cancer sucks rocks big time.
My sister has already had 2 chemo treatments. The treatments have been very aggressive to say the least. On Easter Sunday, my family, that lives near her, went to visit. Brought food so there would be no need for her to fuss or cook, just enjoy her company and spend time with her at home. She was weak, but still had a nice time with everyone.

Yesterday, I received a call from my Mom. My brother who is an EMT had taken the day off and brought my sister to the hospital. She was catatonic, unresponsive to outside stimuli. The Drs quickly diagnosed low blood sodium and began treating her. But she wasn't responding and they suspected an infection and scheduled tests for 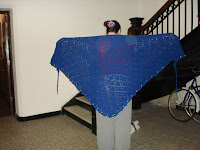 this morning. I wasn't told which tests. I received a call from my Mom today letting me know that the family is on their way to the hospital. My sister's heart stopped this morning after one of the tests. They successfully reanimated her, but they were not going to complete any more testing until she was stabilized. The Dr's prognosis was not very positive.

I wish I lived nearby, but unfortunately don't. With my being out of work, it means no funds for any travelling either. 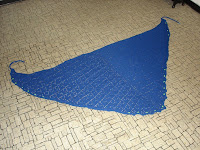 I was on my way out the door to ship the shawl I made for my sister but my mother recommended I hang on to it for 24 hours until we know more. Here are the pictures of the finished shawl. It is 80 inches across the topline and 40 inches down the back. I used acrylic worsted yarn since she requested it be warm and big enough to wrap around herself. I added removable ties to each wing tip so she can wrap it and tie it behind her back to leave her hands free. 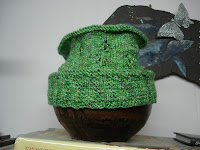 I also made two hats for her. One my own design (dark green) and the other (light green) from a pattern (lacy chemo cap) I found on Ravelry.
I added beads in both hats as I like the effect the sunlight reflecting from beads gives. It's like stars sparkling around your head.

I wanted to make a cap for my sister that didn’t look like the average chemo hat. 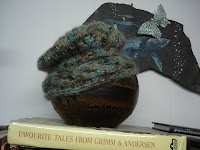 The softness of Patons Nuance yarn made me think of something soft and cozy, like cuddling a kitten or baby goat. The earthy colors I know would appeal to my sister as much as they appealed to me.

Loving the cabled bands seen on many sweaters I adapted it to a hat. Making the band, joining it and then picking up sts from the edge to knit the lacy hat gives it a nice shape and it should stay on her head without using the ribbing seen in so many hats. I also added beads in the lace just to make it a bit more special.

Posted by MarieAnge at 4:14 PM