Well, well, well, I am the proud aunty of twin boys! On March 6th, my brother and his wife doubled their family LOL
The boys came a bit early, but still doing great. Olivier was born first and weighs in just a bit over 5 lbs and Alexi followed coming in at just under 5 lbs. Pretty gosh darn awesome for twins. I've been busy knitting up wee caps and sockies to keep those itty bitty toes warm. 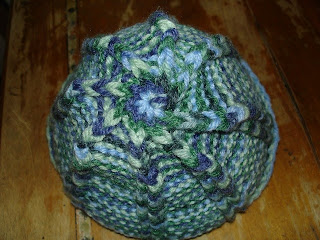 The caps are my own design which will be published on Ravelry soon. It is in the test knitting stage at the moment. Here is a sneak peek at the hat!
The socks are a simple pattern called Jelly Bean Baby Socks that I found on the Spud & Chloe blog. You can also connect via Ravelry for the pattern. I absolutely adore Susan Anderson's patterns. I've been lucky enough to get a couple of her books and they are amongst my most favorite. Always at hand by my side of the couch.
Also crocheted a few bibs to catch those burps and other unpleasant things that babies tend to do. Doesn't matter though, we still love them, burps and all. The bibs are my own design. With the birth of these wee ones, I was reminded of how frustrating it was to find proper bibs when my kids were newborns, so I designed a bib that suits what I wanted out of a bib and still have it look nice and easy to wash and dry. Socks and bib photos will come soon.
I don't have any photos of the boys yet, but as soon as I get some, I will gladly show them off :) Should be interesting to see which side of the gene pool dominated for these wee babies.

Sometimes it amazes me how you meet people through some rather interesting twists and turns in life. Almost 2 months ago, I was cruising around the various blogs I follow and noticed one mentioned that I hadn't been to yet. The name of the blog is what struck me most, such a cute little name... Pink Feather Paradise. I followed the link and first post I see is of Alex challenging herself to make granny blocks from a book she owns. One of the blocks, named Willow, that she made was incredibly gorgeous. She hadn't mentioned which book these were from so I left her a message asking :) And that was the beginning of a lovely communication between us. Turns out that she has an extra copy of the book 200 Crochet Blocks and she's quite willing to send it to me!!! After a few false starts, the book finally arrived yesterday. It wasn't alone in the envelope. Alex added a couple of balls of some of the yummiest feeling yarn I've felt in a while in pale blue! I'm guessing the book didn't want to be cold on it's long trip across the big pond. This book has joined my favorites pile by the couch. I've paged through it several times now and keep drooling over the gorgeous squares. Take a few minutes and drop by Alex's blog. It's worth the trip :)

Alex also challenged me to make one of the squares that she was having problems with. For anyone who has the book, it's the square on page 71 called Granny Stripes. I'm having the same problem as Alex. It's not square! Going to keep trying until I figure it out LOL In the meantime, those failed squares a la rectangle are going to become a seat cushion for the office kitchen chair. The one that's on there now is getting very thin and could do with an extra layer or two of colorful blocks.

In my stash now for at least 2 years have been sitting these 2 balls of brown heather yarn. Mary Maxims Best Value yarn. Every single project I have attempted to make with this yarn has failed miserably. The yarn is for the most part too limp, likes to split, but oh so soft. Today I came across a pattern for a round pillow that for some reason made me think of these 2 forlorn balls of yarn sitting at the bottom of the not so well loved tried and failed yarns tub. I hauled it out once more and set to following the pattern. It's working beautifully! The crochet stitches used in the pattern are making the yarn stay put and still feels incredibly soft! I've finally found something that can be done with this yarn LOL The book is Special Techniques & Stitches in crochet. The pattern is called Slip-ring Aran Pillow on page 10. It looks hard but it absolutely isn't! Just one more bonus to this book.
Posted by MarieAnge at 12:37 AM