Not Quite Straight Scarf revisited 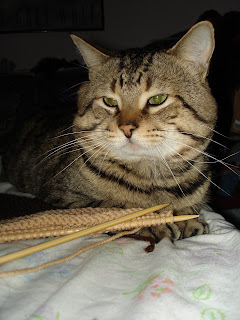 After a false start; I had to frog my first attempt since I missed a crucial detail in the pattern. (when to start the main pattern) 1 row, that was all I'd missed but it made the scarf do some pretty weird directional stuff.
Gambit passed judgment on the first version so I had to frog it (not Gambit!).
The good thing about messing up the first version was that I discovered that if I followed the pattern exactly, the resulting edge of the scarf would have loops sticking out. I didn't like that, so I went with slip 1, knit 1, increase 1 instead of the k1, inc 1 that the pattern asked for. The resulting edge is much smoother with no loops sticking out. 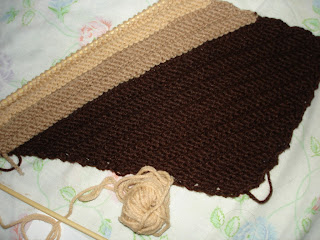 This is my second attempt at this scarf. The edges are now smooth with nothing sticking out.

I'm using a non wool yarn from my stash since there is a wool allergy where this scarf is going. I really like the wave effect moving on the diagonal. It's a nice change from the "hohum it's a scarf".

In other news, the baby hooded jacket is still at the hood part. I have to figure out the hood before I go any further.

My daughter's Lil Red Riding Hoodie is almost done. I just need to get to a store that sells zippers. Since that involves taking 2 buses, it's going to wait until I need more supplies before I go or I get desperate enough.

I'm not overly fond of using city transit, but it's either that or walking. In my husband's favorite distance descriptive words, "This is more than a fair walk".
Posted by MarieAnge at 7:06 AM