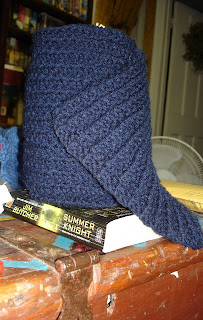 The lane I walk down when I leave work always has a homeless man quietly sitting by the wall on a piece of cardboard with a cup in his hand. He never asks for money, always has a smile on his face, says hello, have a good day... Until this week, I did not know he was truly a homeless man until I saw the local police picking him up to bring him to one of the shelters. (we have many panhandlers who live in homes that pretend they are homeless) The day I saw them do that, it was -22C with the windchill and he was wearing a thin coat over a hoodie, no socks, running shoes that had seen better days, no gloves on his hands. He couldn't stand up by himself, he was so thin and weak and he'd been sitting against the wall far too long, his legs were numb from the cold. The following day he was back sitting against the wall. I gave him my coffee to warm up. 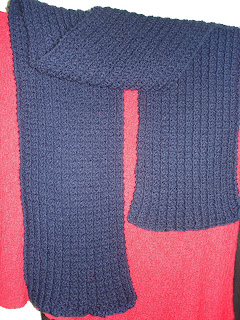 The following day, he was there again, I saw the police were coming to pick him up and for some reason, it struck me to ask him if he would like a scarf to keep his neck and chest warm. He looked at me and said, Nono, don't spend money on me. I insisted, that the scarf would be knit by me, his eyes lit up and he said "You would do that for me?" I said of course and asked him about his favorite color. I went with the Scrunchable Scarf pattern since it gives the scarf a lot of loft to trap warm air better. He will be receiving a navy blue scarf today as soon as I see him, along with a pair of warm socks. Unfortunately, I will have to buy the socks since my knitted socks don't live long for some reason.

*gets on her soapbox* WARNING! THE FOLLOWING PARAGRAPHS ARE WRITTEN TO MAKE YOU THINK ABOUT YOUR FELLOW MAN. STOP READING NOW IF YOU DON'T WANT TO FEEL GUILTY.

How can anyone in 2009 walk by someone who is in desperate need of food, clothing, a warm place, in North America? Have we become so blase that we don't even see them anymore? Am I so new to city life that my heart cries when I see someone in need or am I the "sucker" people speak of. I don't know folks, but who are we to say what we would do in his place unless we've been there. We see famine in Africa, wars in so many countries, death, murder, genocide, every time we turn the TV on, have we stopped being human somewhere along the way, have we stopped feeling?

It's easy enough to spot the real thing from the fakers and the drug addicts. I see someone begging for money wearing new shoes, new coat, clean, smelling of cigarettes, there's someone who is not dying from lack of food, a warm place to live in, etc. When you see someone who is thin, weak, bedraggled, obviously hasn't seen the working end of a shower in months if not years, who's clothing pre-dates Trudeau, you know that there's someone who could use a cup of coffee, a sandwich, a hello, a sweater you don't need anymore, etc. If you feel that you can't give them money, that's fine, give them something they can use. You'll know fast enough if you're dealing with a homeless person or a "faker" looking for cigarette money, booze, drugs, etc.

We're not rich, hell, we live below the poverty line ourselves, but there are people in worse places just outside your door. If I can't spare a cup of coffee for another human being who is freezing, that makes me a very shallow heartless person indeed.
*gets off her soapbox* Nuff said
Posted by MarieAnge at 7:30 AM

I know without a shadow of a doubt that you are not heartless. You truly are an Angel :)