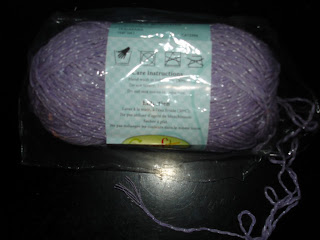 Trying out a new yarn that's sold at the local Dollar Store. It's a blend of 95% cotton and 5% polyester. Two strands twisted together and then two of those strands twisted together again. It's not a smooth cotton to say the least and tends to split easily if you're not careful while knitting. After looking at it more closely, it seems to be missing that strand of polyester. That may explain why it splits so easily. There's nothing to hold it all together.

I bought a couple of balls of red and several of a light mauve. The mauve looks and feels better since the strand of polyester is wound around the cotton and it doesn't split as easily as the red does. 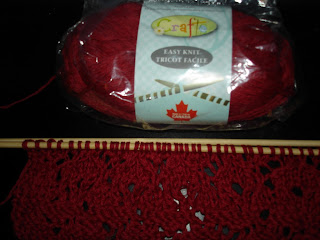 I'm currently trying the red using the Diamond Drop Lace Dishcloth from Knitwits Heaven.
So far, I'd say the red is only good for knitting swiffer cloths and dishrags. Maybe with two strands held together, some grocery bags.

I'll update as I put the finished cloth to the test. As far as their claiming it's an easy knit fiber, I would strongly disagree with them. It feels rough to the touch and doesn't slide well if you compare it to Peaches N Cream cotton or any other cotton for that matter!

This basically feels like the twine used in the old days to tie packages together at the butchers, just doubled up instead.

Posted by MarieAnge at 8:00 AM