December Blahs... no, make that Blues

Well folks. I must apologize for not posting for a while now.

If you heard a loud thump a few weeks back it was me. I was happily knitting along when it finally occurred to me that all these great presents I was knitting would not get to their destination. Once that realisation had sunken in, my happy mood dissolved to sadness.

Why won't they make it to their destination you ask? Very simple answer... Money. The green stuff or aka Monopoly money aka Canadian dollars or lack thereof. With my latest job placement ending on Christmas eve and no prospect of employment for at least the following 2 weeks means our meager budget suddenly became non existent. So sending presents is definitely not on the list of must haves. Oh well, at least this way I have more time to knit everything and I guess I'll just send them all post Christmas when I have steady work again.

It just kind of took the wind out of my sails to put it mildly. So yes, it took me 2 weeks to snap out of it. At least I dug my way out of that pit of despair :)

I have been knitting! Almost finished the mystery present for my darling daughter. Will only post pictures after she's received it though since she reads this blog :) 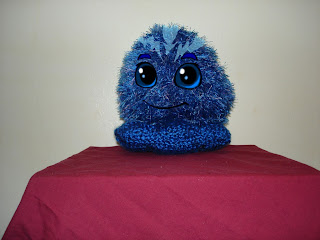 Also working on a cabled hat of my own design. Currently figuring out how to line it and I think I'm just going to do a straight knit in the round after I've done the k2, p2 hem and fold it to the inside and attach it at the top. That should work to keep the wind out. It looks pretty neat so far.

I also knit a jubjub to enter in a competition in Neopets. I could not figure out for the life of me how to embroider eyes on the thing so my darling husband photoshoped the eyes, mouth and eyebrows on. Looks pretty neat!
Posted by MarieAnge at 8:34 AM

Your jubjub is so cute! Hubby did a good job at the photoshop too :)
Thanks for the comment on my blog..I've missed you and wondered if everything was ok. I haven't post much either and know how you feel.