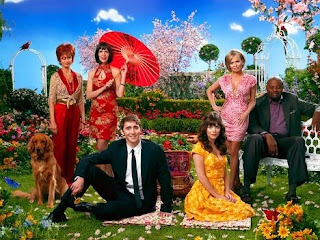 New episodes will not be ordered after this season. Oh, just fracking great! A show that was actually entertaining and intelligent, one of a handful out there in TV world that actually kept my interest and ABC is burying them. How sad, how truly and terribly sad.

But then again, we've also seen shows such as Dead Like Me and Wonderfalls go the same route. Firefly was another of those gems that tv executives did not understand and therefore axed. It seems that if you are intelligent and have an attention span of more than 5 minutes, you are not part of the average population.

It seems the average television viewer wants to be entertained with insipid sound bites, visual oohs and aaahhhs. Case in point, Dancing with the stars, American Idol, Wife Swap, Supernanny and many many others of the same ilk. Come on now, have we become as goldfish, with only enough brains to turn on the tv, sit and watch whatever drivel the executives "think" will get them the most advertising dollars? Have we become so inured by these that we can't even find within ourselves the strength to say NO more!!! Judging by what is on TV these days, I would have to say "I rest my case" and turn the box off.

I will truly miss Pushing Daisies, the knitting, Digby and all the lovely intelligent characters that made up such a wonderful show. Shame on you ABC, shame!

Goodbye Pushing Daisies, you will be missed by many.
Posted by MarieAnge at 10:55 PM