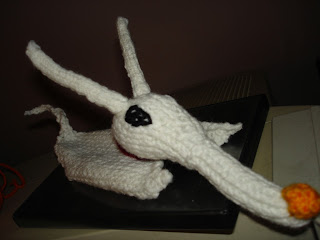 I know this is a bit late, but that's the way things go sometimes. After spending Monday with my daughter and celebrating my darling husband's birthday, I had to regroup and figure out where I'm at in the various wips I have on the go.

When my daughter walked in the door she instantly beelined on my pumpkins and hinted that she would love to have a Zero of her very own. You can see that I have obliged such a sweet request and she will now own her very own ghost dog.

It was a lot of fun to make. I changed a couple of things from the pattern though. I used magic loop to knit the ears instead of doing them flat and sewing them up after. I also knit the collar instead of just wrapping yarn around this neck since this toy may end up in small hands at some point. The collar was easy enough; I CO 20 sts on #3 needles, knit three rows and bound off. I used the yarn ends to mattress stitch it closed around the dogs neck. Voila!

While my daughter was here, we ended up going to a couple of fabric stores to pick up a zipper for her Red Ridin Hoodie which is almost done. I had her try it on and it fits beautifully! She won't be cold wearing it when she's walking to and from work. I forgot to snap some pictures, but I will when she comes to pick it up. I love the pattern and would recommend it to anyone who wants and simple hoodie. The hood part drapes and reminds me of elven hoods which is what she wanted.

We also ended up at both Zellers and Walmart looking for a birthday present for darling husband. Oddly enough, we kept finding ourselves in the yarn and yarn 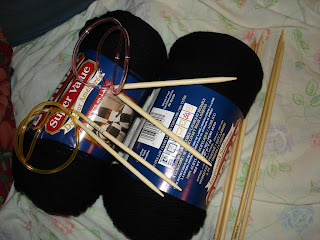 accessories area at each place... Zellers was disappointingly poor in color selection so we went looking for a birthday present. Again, no luck with that either. So on we went to Walmart. Again, the inexplicable gravitation towards the yarn aisle.... Oh well, if you can't beat 'em... Strange things started happening; 2 balls of Bernat's black yarn that I needed to keep working on darling husband's Kenobi jacket fell into the basket. Then I look away and size 10 and size 8 bamboo knitting needles clatter to the bottom of the basket quickly followed by a size 10 and size 8 circulars in bamboo find their way to the bottom of my shopping cart. I didn't put them there! Honest! My daughter wanted to repay me for the hoodie and this is how she did it. I am so thankful to have such a wonderful caring daughter.

The only disappointing part was when I opened the circular needles, t 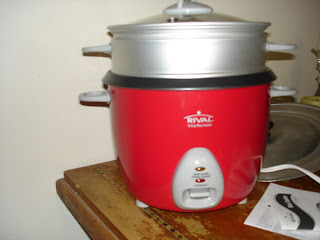 hey both are short cabbles, no magic loop for those needles :( but I can definitely use them for everything else!

We also found darling husband's birthday present. A rice cooker/vegetable steamer. I know, doesn't sound very exciting, but he loves to cook but hates making rice. It usually sticks to the pot or burns. This way, it won't stick and/or burn. I also love the fact that it's a vegetable steamer as well since it will free up a burner when I'm making veggies and I have to make a cheese sauce.
Posted by MarieAnge at 7:30 AM

What a cute ghost dog! I love it:) My husband wants a rice cooker too -- I don't think it is strange at all.

Too bad about the bamboo round needles though... :(