Thursday night and what is happening?

Well, it's Thursday night. How am I doing so far this week? I just started a new temp job that hopefully will last until the beginning of December. Data entry for 7 hours a day, bleh! but it's a job! and a pay cheque! :)
On my way to work this morning, walking down the street, it was so foggy it brought an old saying to mind "Pea soup Fog" and it really was thick enough I could have cut it with a knife. It felt so eerie, you could hear muffled footsteps on the sidewalks but it felt like there were cotton balls stuffed in my ears. People would appear and disappear out of the fog like ghosts drifting by. The houses and apartment buildings on each side of the street were dim shadows 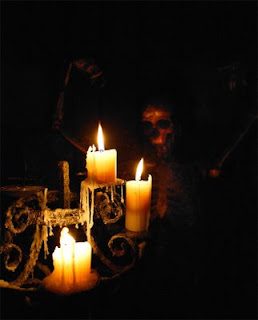 with the odd glimpse here and there when the fog broke open but quickly filled the void once more.

I just found out a dear friend lost her sister this week. My heart goes out to her. My mother called last night to tell me a long time school friend passed away this week from an alleged hunting accident, he had cancer, inoperable and knowing him, he didn't want to face the pain and humiliation of the later stages. I wish his wife, children, and the rest of his large family strength in the days to come dealing with the loss.

I bought some plastic jingly balls (cat toys) to stuff into the cat ball toy I knitted last night. I figure if I stuff batting all around the plastic jingle ball once it's inside the knitted ball, it should work just fine. Guess that remains to be seen. 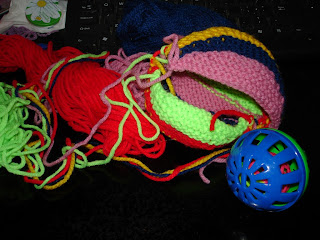 Dearest husband wasn't up to cooking supper so I picked up some Subway. BLT sub for him and a chicken bacon ranch sub for me! No dishes to wash, no fuss, no muss and it was good. Who can complain. Not like we do this all the time so it was a nice break.

I will be making some chicken salad spread for him so he can have something other than peanut butter and nutella for lunch. I'd rather make it myself, that way I can control how much salt goes in it and it's fresh, no preservatives. It may look like baby food, but it's delicious! 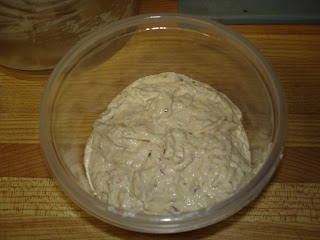 Cook the chicken breast, let it cool. Then cut up into chunks and put in food processor. Cut off the equivalent of approximately 3 to 4 tbsp red onion and add to processor. Blitz those together until chicken is ground down to a paste. Add mustard, salt, pepper, mayo, relish and blitz until blended. You may need to add more mayo depending on how spreadable you want the chicken to be. Taste to adjust seasoning.
Put chicken salad into a resealable container and keep in refrigerator. Makes a great spread for sandwiches.
Let's see how Friday shapes up to be.
Posted by MarieAnge at 7:40 AM

Congrats on the temp job : )
Thanks for the thoughts and kind words. I'm also sorry to hear about your friend. Cancer is very scary.