Well folks, the jury is in on the frog pond binkie 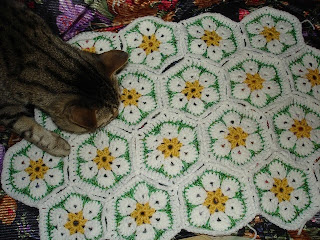 I've mentioned in previous posts that I found a really cool crochet motif and decided to turn it into 2 baby blankets for my newborn twin nephews. I also posted a not very good picture of my progress at that point.
Well, I haven't stopped working on it since then. Remember, I set myself a goal of finishing what I start to combat the dreaded "Startitis virus". 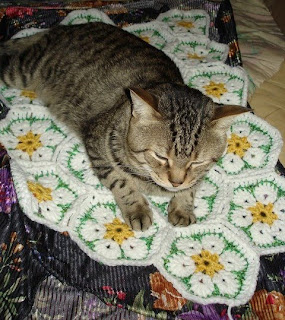 Within seconds of laying the blanket out of my bed, Gambit was right at it, inspecting every inch of it, smelling and walking around it, on it, and finally, after some deliberation decided that he approves of my work so far! (19 motifs)
I'm really enjoying the creative process for this blanket. I started off with a hexagon motif, chose colors and then set to with my crochet, assembling the hexagons as I go. Finally, to give the impression of lily pads, I'll be adding some blue between each hexagon. I'll also be adding a bit of whimsy to the blankets, but that will be a surprise for later. Still stewing on that idea and really now, can't give it all away, can I? 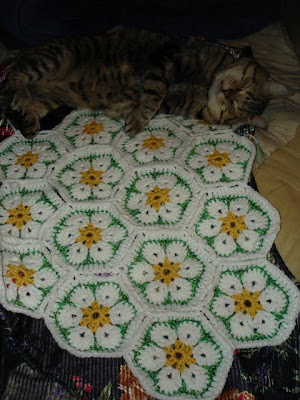 I've been keeping notes on the blanket so I may end up writing up the pattern yet. First though, I'll finish the blanket!
Here in all it's glory, the Gambit approved binkie!

Doesn't he just look like the cutest kitten ever all curled up on the edge of the blanket? Last time he was a kitten was 8 years ago but that's not stopping him from behaving like one most days!

Last night, he was having a rollicking good time with one of his toys. I had an extra McDonalds kougra (neopet plushie) and gave it to him last year. Up until last night, he'd pawed it around a few times, but not much else. The toy just lay in the pile with the rest of his unwanted amusements. For some reason last night, he dug him out and there began a grand game of toss and chase. He would nab it with a claw and toss it up high enough to bounce off the ceiling in different directions and he'd follow in hot pursuit and toss it again when he'd get to it. This game went on for 20 minutes or so. I didn't dare move since he doesn't seem to want anyone moving about when he's playing this game, so no photos. Sorry! We don't even dare laugh when he's up to his bengal games since he takes laughter as an insult and we wouldn't want that now would we :) 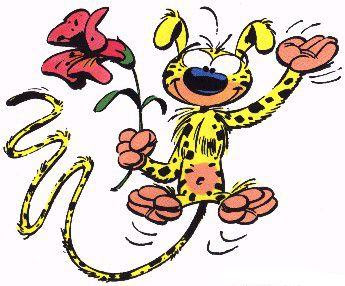 On a different note, I know Easter was yesterday. I just felt too sick to really care. But to all my readers, Happy Easter, or whatever you want to call it if you celebrate it.

In case you're wondering who this silly looking cat/dog/monkey combo is, it's Marsupilami
One of my favorite characters from a comic book (bande dessinée) written by André Franquin. He would bounce in and out of trouble always coming out smelling of roses and his trademark "Houba!" exclamation.

Other comic books I enjoyed as a kid were filled with well loved characters like Boule et Bill, of which the modern equivalent would be Calvin and Hobbes. Others that I looked forward to reading were Astérix and Obélix, they made me laugh and The adventures of Tintin, I loved Captain Haddock for his incredibly convoluted swears. I also awaited with anticipation the further adventures of Lucky Luke. All these bandes dessinée were collected by our catholic elementary school librarian, considering the times and how most adults felt about comic books, it was quite surprising that she would keep ordering the books as they were released. Whatever reasons she had, I loved and cherished every one of those books. Would rush over to the comic book section every week to see if a new one had been added. I read each one several times, scrutinizing the art work, laughing over the jokes and prat falls and wishing I could keep the books for my very own. And all this shows that I was a nerd before the word even existed! LOL
Posted by MarieAnge at 7:46 PM