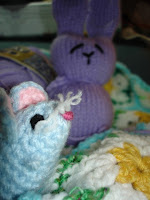 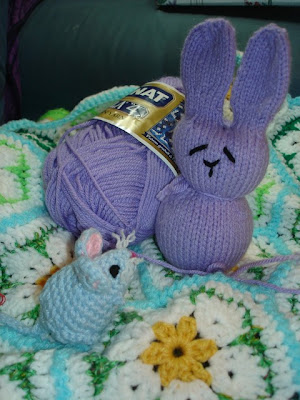 After tying a pretty piece of red yarn, she had found, into a bow at the tip of her tail Mousie felt she was ready to go exploring. She jumped down from the arm of the sofa where she'd been left and landed on a lily pad. It was so soft and cushie and she scurried around for a bit and came up face to face with a strange purple beastie. She, as all good mousies are, said "Good Morning!" but the purple beastie just ignored her. She didn't know that this odd looking purple beastie wasn't finished yet. Like her, only after the last stitch is knotted and the last bit of yarn is snipped, does the magic take hold and they come alive and start exploring. 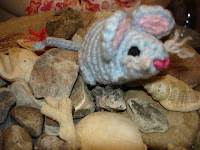 She sighed and off she went to explore other places, looking for new adventures and hoping to make new friends. The next leap she took landed her into a rather rocky spot but what interesting textures under her paws. She especially loved the smooth shell her paws rested on. 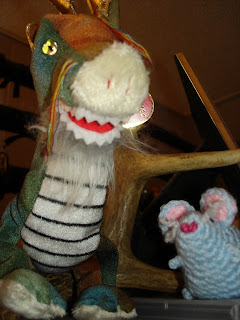 Her next leap took her way up in the air and she landed with a hoomph next to a very strange looking creature who blew smoke and rumbled most menacingly in his throat. She cringed, thinking this was a mistake, but the creature just kept on rumbling. After a few moments, she realised he was singing, or at least what she thought might be singing. So she sat next to him and tried to sing, but only squeaks came out which the rumbling beast noticed. He stopped his rumbly singing and looked down at her "And what are you, pray tell my dear?" he asked in his big rumbly voice. Mousie had never heard such a big rumbly voice before and felt very small and very frightened. The large beast noticed she was quite afraid and attempted to soften his voice. But how much can you soften your voice when you're a big dragon that rumbles all day long. Don't be afraid little one, he said, I'm a dragon. What is your name and what are you? Mousie felt a little less afraid but still kept an eye on the dragon, I'm Mousie, and I got born today! Is that so, said the dragon, and where are you going all by yourself on your first birth day? Mousie thought for a moment, I'm exploring. I want to see the whoooole world so I can make friends and learn new things. Dragon rumbled a laugh which made Mousie's whiskers quiver. He is a big dragon after all and Mousie is so small next to him. Dragon noticed she wasn't feeling too brave, It's alright Mousie, I wish you good luck in your travels, learn and make many friends. Those are the things that are really important for a growing mouse to do. So Mousie with a wave and a squeak left dragon who had already gone back to his rumbling song. 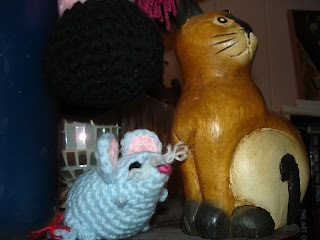 She scurried across the top of the cliff and came up with a start against a rather large statue. It made her feel a bit afraid but she didn't know why. She looked the statue up and down, it had whiskers like her, and ears and a tail, but it didn't move or speak. What a strange world this is, she thought to herself. As she took a jump to get to the next cliff, she thought she saw movement out of the corner of her eye, but when she landed and looked back, nothing had changed. 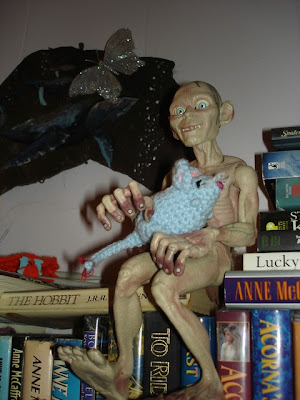 This next cliff was all bumps and crevices. Long flat slabs all standing on end and in the middle, a very odd looking creature sat with his legs hanging over the edge. He was smiling to himself and singing a song about fish. She didn't know what fish was, but according to the creature, it was good eaten cold, fresh from the river, whatever that was. She slowly made her way to the creature and politely cleared her throat. The creature kept right on singing about fish and slapped his hand on his thigh at certain points in the song. By the time she was noticed, she was sitting next to him and with a start, he stopped singing and let out a small yelp. Ahh! I didn't see you, said the creature. Why were you sneaking?! Mousie didn't know what sneaking meant, but she wasn't hiding from the creature either. I'm Mousie, who are you? she asked the creature. He threw back his head and laughed, I am known by different names, today you may call me Sméagol. Do you want some fish? Mousie's eyes grew big, Nice to meet you Mr. Sméagol. What is fish? Again Sméagol threw back his head and laughed, It is the most delicious meat you would want to eat, especially fresh caught, nice and cold. You sink your teeth into one and it makes you feel all nice inside. Mousie didn't think that it sounded very nice, especially the way he laughed. She thought it would be a good time to move along and see where her next leap brought her. She jumped off Sméagol's lap and with a hasty goodbye, she left while Sméagol scampered off in the other direction yelling back, I'll bring you a fish! 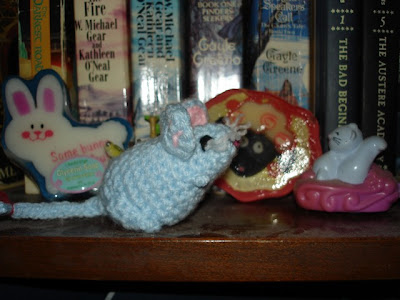 Mousie hoped he wouldn't. It didn't sound very good to her. Although she did wonder what she could eat in this big world filled with all manner of odd creatures and adventures. This time she landed next to the long flat slabs that the Sméagol had been sitting atop of. Running alongside the slabs were all kinds of creatures, all different, all very busily moving along, where to, Mousie did not know. She tried to ask one of them as it raced by, but it was gone before she could finish saying good morning. Then one of the oddest looking things stopped, looked her up and down and said Baahaah! which in her language meant, Hello! Mousie wasn't afraid of these creatures since some were smaller and most were her size. At least she didn't think they would eat her! After some introductions, since more creatures stopped to say hello, Mousie asked what she could eat since she'd noticed her tummy was beginning to rumble like the dragon. Sheepie and Bunny told her about a wonderful food called chocolate and if she was lucky, she would find some. She would know it was chocolate when she saw all the bubbles. She thanked them all and off she went in search of chocolate. 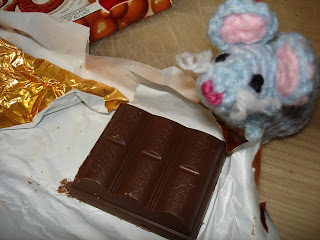 She met many other creatures on her search for chocolate. Some stranger than others. One even had chicken legs but didn't look like a chicken. He called himself a Totoro. What a strange name she thought to herself. At least the Totoro knew where she could find chocolate and find it she did. After one nibble, she knew that this was what she would love to eat all the time! What a strange and wonderful world she thought as she leapt from cliff to cliff. 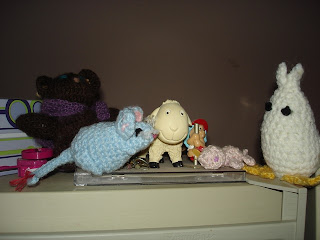 She met, sheepies, bears, turtles, all sizes and shapes, colors she'd never seen before and all of them spoke of the big bunny. She asked if it was the purple creature she had met first thing after being born that morning. It wasn't him they all told her, Bunny was this beautiful, soft and cuddly bunny who had come from a very special place and he was looking for a very special creature to go visit where he had come from. Mousie wondered what could be more wonderful than this place she was in now.
It had been a long day filled with excitement, new faces, adventures of all kind and she began to look for a place to sleep. She asked all her new friends where she could go to sleep and as they were explaining, a soft voice called her name. She turned and saw the most beautiful bunny ever. He had long soft luminous fur that looked so soft and cuddly, she could 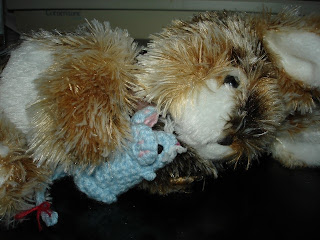 just imagine curling up in that fur and going to sleep with a song in her heart. She was so in awe of the bunny that she uttered a squeak instead of a proper answer. Come and sit with me Mousie, said bunny, I have a very special job for you. And Mousie slowly made her way over to where bunny was sitting. She saw that he had the prettiest eyes, and as she knew it would be, the softest fur. She crawled into his arms and Bunny began to tell her of a special place he had come from and he wanted her to go there. He told her of the wonderful human  called Samm who lives there and of all the new adventures she would have and things she would learn. Mousie felt her heart fill with joy and she slowly drifted off to sleep listening to Bunny's voice telling her of her new home and of Samm.
This story is dedicated to my bestest friends in the world; my Andy, my Karen and my sistersoul Samm.
© MarieAnge 2010
Posted by MarieAnge at 3:31 AM

OOOOOOHHHHHHHH!!!! MY Mousie! I love the story, and the pictures and all the creatures, and YOU! Thank you for Mousie's first day! I can't wait to see him! Hugs! samm

Awwww I love it :D I had such a great time reading Mousie's Story this morning :D :D

Please, someone give my wife a job already? She's obviously going crazy with too much time on her hands. Please??

Only my husband would come up with something like that! LOL

But I could use a job indeed!

And hubby actually admitted he likes the story very much. So there :)

And now he wants his own Mousie...

don't be an ass Andy. ;P What have YOU done creatively lately?

I think we all want a Mousie now! LOL

Awww you have added little feet to the mousie pattern... very cute! I made 8 and the jam lady at hte village cafe sold 5 and I gave 3 to my friend... her children have named them hickory, dickory and dock!

Mousie was very brave and I think she'll be very happy in her new home...